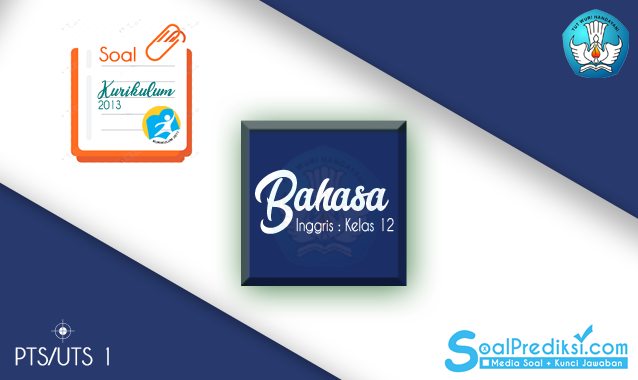 I. Choose A, B, C, D, or E for the correct answer.
Text for no. 1-4.
Birds have a body ‘designed’ for flight. Their bones are light, with spaces full of air, body tapered. They have powerful muscles to move their wings, and breastbone like a ship’s prow to cut through the air. Their wings are specially shaped, and like the tail, have feathers of many shapes and textures, according to their job. Bird’s flight can be gliding or beating. In the gliding, flight, the bird slides through the air, wings stretched out, quite still, carried by current of air. In beating flight, the bird moves its wings like oars, using its tail like a rudder to change direction.

Most birds take off almost vertically from land or water, body straight and wings beating quickly. Once in the air, it leans its body forward and the wings beat more slowly. For landing, the movement are reserved-straightening its body and beating its wings quickly before landing.

3. “Their wings are specially shaped, and like the tail, have feathers of many shapes and. . .”(Paragraph 2).

4. The birds’ powerful muscles are used to. . . .
A. Move the wings
B. Take the breath while they are flying
C. To move their tail
D. To glide and beat
E. To help them looking for the food

6. What the expression used in the dialogue?
A. Showing gratitude
B. Giving advice
C. Response the gratitude
D. Complimenting
E. Giving suggestion

7. Hurley : “Why do we have certain age to be considered an adult?”
Ilyas : “I don’t know. Let me think.”
Hurley : “. . . .”
To talk about possibilities, the best expression to fill the gap is. . . .
A. Is it possible for people older than adult age to still think like children?
B. Do you think we are capable of doing this job?
C. Can we stop doing our homework?
D. May we consider as an adult in this age?
E. Do you agree with the statement?

8. If you want to make a prediction, you may say . . . .
A. Our farmers grow rice
B. Our farmers will become factory workers in the future
C. Our farmers’ wealth have increased significantly compared to the last 15 years
D. Our farmers can grow their plants well
E. Our farmers have possibilities to use the newest technology
9. Joanita regrets her past. She could say all of the followings, except. . . .
A. If I hadn’t been expelled from my school, l would have been able to study in a university
B. I wish I had not let my sister go
C. I am sorry about your loss
D. I was so upset with the moment
E. If I am a bird, I will fly over the sky for weeks.

10. Aria : “Mr. Made, can I bother you with something?”
Mr. Made : “Certainly.”
Aria : “. . . Do you know why the government didn’t lower our export taxes?”
To express curiosity the followings can replace the blank, except . . . .
A. I want to know something
B. I’ve been meaning to ask you
C. Can I talk to you?
D. Let us discuss more this matter
E. I am so curios with this issue

II. Identify the following paragraph, find the “If Clause/If Sentence” then explain it briefly.
Pablo was once known as a talented footballer in Bilbao, Spain. Unfortunately, his football career was not that long due to one mistake, his impatience. Things would have been different, if he had been more patient in achieving his dream. When he was 15 years old, he already played for Athletic Bilbao Youth team. His talent attracted Real Madrid and was offered to move there. Naturally, he was excited about it. However, his father did not share the same opinion. He once told him not to do it just yet. Madrid was notorious for their lack of faith in their young players. But, he was sure; he could be the star there. It turned out that his decision was wrong. If he had listened to his father’s words, he would have still be a famous player as back then PSV Eindhoven, Valencia and Sevilla also made their offer to promote him for the senior team beside his own club, Athletic Bilbao. Perhaps they are not as legendary as Real Madrid, which is simply Los Galacticos or the ebst team of the galaxy but they would let him play more than in Madrid. If he stayed in Bilbao, he would not have had to play in Madrid B, then been loaned to Leganes, Alaves, Real Sociedad before sold to Deportivo La Coruna.

His fate as a footballer had to be ended as he had a serious injury there which foced him to retire early. Apparently, he has learned his lesson that nothing comes out instantly. He then decided to focus on being a manager to start up his next career in football. He’s now a head coach of Granada, which he has surprisingly brought to the Spanish Cup Final. If he can be patient in building his coaching career, he will succeed. When one reporter asked about his failure in the past, he just said, “If I could go back in time, I would listen to my parents’ advice”. However, that part of my life is over. If I can successful now, I am sure it will attract the big clubs and I will move to Barcelona one day to have his revenge for Les Merengues Real Madrid.