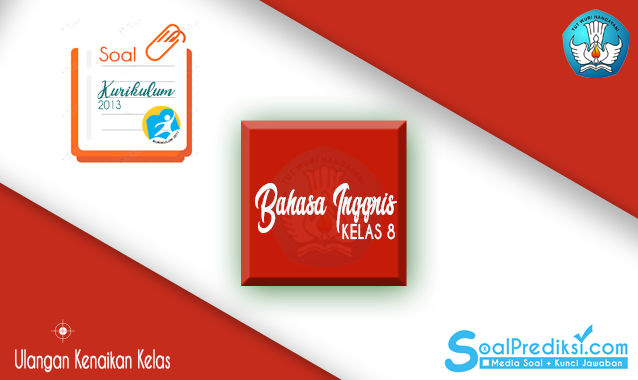 Text for no. 1 to 2.
I have some good news for you. Last month I passed my final examination. A week ago I won a senior high school competition. Last night mom and dad decided to send me to a famous English course in my town. If my English sores are excellent, they’ll send me abroad to further my study. Great, isn’t it? I’ll do my best.

I want to be a good pediatrician like you, Uncle.
Well, that’s all for now. Looking forward to your reply.

1. What is the purpose of the letter?
A. To inform some good news.
B. To describe the writer’s school.
C. To tell the writer’s experience.
D. To entertain the reader with a joke.

To : All Basketball Team

We will have a technical meeting for the next match. Please do come to school on Sunday 12 th at 9:00 a.mCoordinator

3. Who can come to the meeting?
A. Readers
B. Basketball team
C. Students
D. Anyone

4. Which of the following statement is NOT TRUE ?
A. The agenda of the meeting is about the technical matter.
B. The meeting will be held in the morning
C. All basketball team are invited
D. All the students play basketball.

6. Where do you usually find this notice?
A. On a notebook
B. On a computer
C. On a billboard
D. On a cellular phone 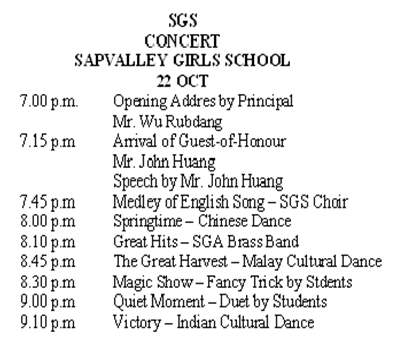 7. What does the text about?
A. Concert invitation
B. Dancing competition
C. Opening ceremony
D. A schedule of a concert

8. How many times dances are performed on the concert?
A. Once
B. Twice
C. Three times
D. Four times 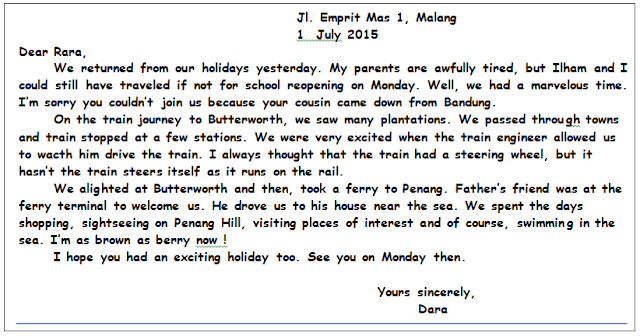 9. When did Dara’s family go to Penang?
A. on public holiday
B. during the holiday
C. during the weekend
D. during the school holiday

10. Where did Dara stay in Penang?
A. At a hotel
B. At a rest house
C. At her friend’s house
D. At the house of her father’s friend

12. What is the information about ?
A. Plaza
B. Hotel
C. Restaurant
D. Apartment

13. What does the place offers ?
A. Traditional food
B. European food
C. Indonesian food
D. Chinese and Indian food
Text for no. 14
14. It’s a beautiful morning. The parakeets and their king perched on a …14) of tree. They did not know that the hunter was hiding. The hunter wanted to catch the parakeets with his net.

Mr. Stanley drove the car … (18). They went to the gas station to buy the fuel for his car. They bought a full tank of the fuel because the traveling took three hours to get the beach. After getting to the destination, they had lunch first. They felt hungry after long journey. They ate under the coconut trees on the white sand. Then they … (19) in the sea, played a ball, and took a walk on the beach before they got home at 4 in the evening

Text for no. 21 to 23
Last summer holiday, my family and I spent one night at the countryside. We stayed in a small house. It had a big garden with lots of colourful flowers and a swimming pool.

First, we made a fire in front of the house. Then, we sat around the fire and sang lots of songs together. After that, we entered the house and had diner. Next, we sat in the living room and watched a movie. Finally, everybody fell asleep there.

24. Arrange the following jumbled sentences into a paragraph.
1. The leaves are long, stiff, and thick.
2. It can only produce flowers, not fruit.
3. Orchid is one of the most beautiful flowers on earth.
4. It lives on a tree.
5. People like to use orchids as a decorative plant.
6. Its trunk is thick and budding.

Text for no. 26 to 27
Last month SMP Satria team entered for tug-of-war contest with SMP Taruna. Two weeks before the contest the boys of "SMP Satria Team" started practicing hard. "We must learn to pull the rope together at same time, "says Arya, their team leader. "By this way our team will be strong."

On the day of the contest, the team from SMP Taruna arrived at SMP Satria in a bus. Everyone was surprised to see that these boys were much taller and bigger than the boys of SMP Satria. "We'll surely lose," said Dono, a member of SMP Satria. "Don't give up so easily," said Arya, "We must try out best."

Soon the contest began. Which team do you think won the contest? It was SMP Satria. It was too strong for the SMP Taruna team, why was that so? You see, the SMP Satria led the rope together at the same time. SMP Taruna on the other hand, was not united at all.

26. Which is the best title for the text above?
A. The strong boys
B. The winner of the contest
C. The students competition
D. The tug-of-war contest

27. Why did the SMP Taruna team lose the contest?
A. They pulled the rope at the same time.
B. They were taller and bigger.
C. They were not united.
D. They gave up easily.

Text for no. 28 to 30
Have you ever had problem with your close friend? I have. My close friend’s name is Deva. Actually, he is nice, but sometimes, he is very annoying. As boys, we often play football together. Both of us like drawing pictures.

He said sorry to me and returned the crayon. Actually, I did not want to forgive him because he had done it many times. However, I finally forgave him because I like to be his friend. Now we are still close friends although sometimes he annoys me. Everybody can make mistake, right?

28. What is their problem?
A. Deva took the crayon without permission.
B. The writer and Deva are close friend.
C. Deva lost the writer’s crayon.
D. The writer borrowed the crayon

30. What lesson can we get from the story?
A We can make our friends annoyed.
B. Everyone can make mistake to other people.
C. We should ask permission to borrow something.
D. We should not forgive our friend’s mistake. 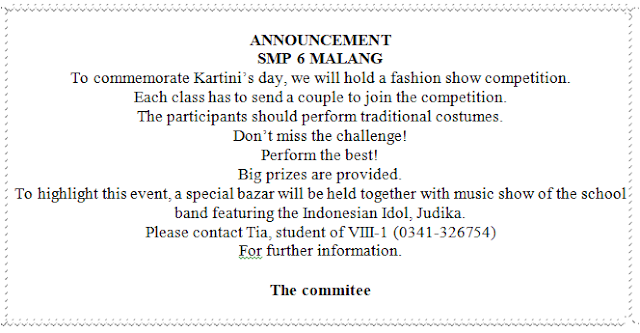 32. What does the word “to commemorate “ in the sentence mean?
A. celebrate
B. create
C. promote
D. spend

Text for no. 33 to 36
Arny : I went to Way Kambas Reserve last holiday.
Luna : Is it interesting?
Arny : Yes, it is. I think it’s more interesting than the zoo in Jakarta.\
Luna : What did you see there?
Arny : I saw many protected wild elephant there.
Luna : Why are there protected?
Arny : Their number have been reduced because of the illegal killing.
Luna : What are the elephants killed for?
Arny : They are killed for their tusk.
Luna : I feel sorry for the poor animals. May be I will go there someday.
Arny : Yes, you should.

35. Why were the wild elephant protected? Because.....
A. they will be trained
B. they can not live in the jungle
C. they disturbed the local people
D. their number were reduced by illegal killing

Text for no. 37 to 38
Andika : Next week we will have a one week holiday. What about going to Bali?
Rama : That’s great! Bali is very fantastic. We can enjoy various tourist object to offer, such as: Tanah Lot, Kintamani, UluWatu, TirtaEmpul, Tampak Siring Palace, TanjungBenoa, and some beautiful beaches.
Andika : What about the accommodation?
Rama : Oh! Don’t worry! There are many hotels, bungalows, villas, and restaurants, some with international standard.
Andika : Wow! That’s wonderful! Let’s go to Bali!
Rama : Yes, let’s prepare for everything.
Andika : Okay.
37. How many beautiful places mentioned by Rama in the dialogue?
A. two
B. three
C. four
D. six

Text for no. 39 to 40
In my house yard, I have two rose plants which I plant on pots. I water them every morning and am happy seeing the change each day.

On one plant, there are some blossoming roses. They look very beautiful and smell so sweet. There are also some roses that are still wrapped in tight green buds. Unluckily, I could never notice the process of blossoming, although I really want to.

I like seeing and stroking each delicate petal of the roses. But, if I touch it, I should do it very carefully; otherwise, I will destroy it.

I always get angry if my younger sister picks even just one of the roses. Yeah, it is because I really love my roses.

39. Which part of the roses is NOT mentioned in the text?
A. lovely smell
B. beautiful blooms
C. tight green buds
D. sharp thorn

40. What could not be seen by the writer?
A. The process of blossoming
B. The rose plants
C. The delicate petal
D. The green buds

41. Sisi is thirteen years old. She goes to the Happy Lake Garden with her father on Sunday.

Text for no. 42 to 46
Rani and her friend, Janet were on a bus on their way to the swimming pool “It is a lovely day. I am glad we decided to go for a swim,” Janet said. “Me too. I hope the weather stays this way the whole afternoon. This is the beginning of the wet season and it is very difficult to predict the weather. Sometimes it is nice and sunny, then suddenly it rains heavily. When is the rainy season in Indonesia?” “The wet season is from November to April and it is followed by the dry season, which last from May to October. You know we have only two seasons in Indonesia,” Rani answered. “Does it rain heavily during the wet season?” “Yes, it is. But the heavy downpours are interspersed with periods of sunshine.”

43. What month do you think it is when Rani and Janet went to the pool?
A. September
B. Oktober
C. November
D. December

44. What season do we have from May to October?
A. dry season
B. wet season
C. rainy season
D. two seasons

45. Where did the conversation take place?
A. at the swimming pool
B. on the bus
C. at Rani’s house
D. at Janet’s house

Text for no. 47 - 48
Mr. and Mrs. Damiri are from Malaysia. They are going on three day holiday to Medan and Lake Toba. This is what they will see and do.

47. Where will Mr. and Mrs. Damiri fly from?
A. Prapat
B. Medan
C. Kuala Lumpur
D. Pematang Siantar

48. When will Mr. and Mrs. Damiri visit Samosir Island?
A. After shopping in Medan
B. After listening Batak songs
C. Before having lunch at Tao Island
D. After enjoying Puppet dance show

Text for no. 49 to 50
Last weekend, the girl scouts and the boy scouts had a “Persami” activity outside their school. They left for the woods at five in the morning. After a long drive they arrived at the woods and found a good camping site.

“Let’s set up tents here!” said the leader. Then, they started to work. They needed a pole, some ropes, and nails for each tent.

In a short time, the tents were ready and they put small flag on top of each tent.

The girls made a fire and cooked their lunch while the boys were busy working. As soon as the lunch was ready, they immediately started to eat. Of course, it was a very simple dish, but it was a very good lunch for them.

After a little rest, the leader blew his whistle and all the girl scouts and the boy scouts gathered around to start their “Persami” program.

49. When did the girl scouts and the boy scouts have a “Persami”?
A. last year
B. last semester
C. last weekend
D. in the morning

50. What are needed to set up the tents?
A. some poles, ropes, and nails
B. the file and the meals
C. the tents and the place
D. some poles and flags